The virgin beaches of Algaiarens, also known as La Vall or La Vall d’Algaiarens, are placed at the north coast of the island, and very close to Ciutadella. It’s easy to get there by car or by bike, and there are two parkings at 300 and 5o0 meters from the access to the beach.

A curious fact of the beach: it appeared in the famous Estrella Damm commercial of 2010

How To Get There?

To get to Algaiarens from Ciutadella you have to take the road of Cala Morell and turn off to the urban area before arriving to the intersection. It’s difficult to get lost as it’s very well indicated, like almost every place in Menorca.

If you come from Maó you have to go to Ciutadella and when you are about to get there, you will see the signs indicating Cala Morell, you just have to follow them. In order to get to the parking, you have to go through a narrow path surrounded of pine trees, so it’s recomendable to drive carefully and slowly, specially because of the cyclists that you may come across.

At some ponint of the path, you will see at your right the Son Angel, farm where you can do horseriding routes of 1 hour for around 20 Euros. At your left, if you pay attention, at some point you will be able to see a closed metalic fence. It’s the private access to Ses Fontanelles, a fisherman shelter used to take the boats out of the water. There are also kayak trips starting from there.

You can also arrive by public transport using the bus line 62, that will leave you at 1km from the beach, in the same parking where the cars park. There are two parkings available according to the affluence of tourists at the beach. From the first parking you will have to walk for 5 minutes, and from the second one, about 10 minutes.

Once You Get There…

The sand of the beaches of La Vall is fine and white, something pretty unusual in the north coast beaches of Menorca that habitually have coarse and dark sand. La Vall is divided in two zones.

The closest to the parking is known as Tancats beach, and the farest one the Bot beach. If you want to go to the last one you will have to walk for 10 minutes. As many beaches of menorca, the sunset in the cala is very beautiful although it’s not directly avobe the sea, and the beach is pretty emptied at the dusk.

If you go when the wind blows from the south, the water is very quite and the sea looks like a pool.

La Vall is one of the virgin beaches that luckily is close to some villages like Cala Morell. Here you can find two suggestions of rural hotels very near to La Vall.

The route between Cala Pilar i Algaiarens can be done both on foot and by bike. As said above, one of the problems of this section is that Cala Pilar is not well connected, so if you decide to do so you will have need support, or otherwise make the way back and forth the same day. 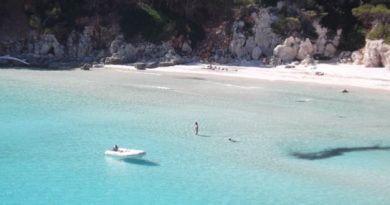 Menorca in 7 days – What to See and Do in Menorca

If you are going to be in Menorca for 7 days this is the guide to the best activities, beaches and restaurants that I recommend visiting. The guide is planned by days, taking into account the proximity between each activity or place, but you can also exchange the activities between days without any problem, ¡these are your holidays! 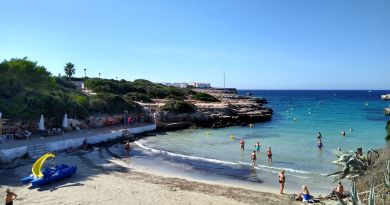