The Sanitja port or Sanisera is a natural port located next to the old roman town Sansiera. The port is in the Caballeria cape and it has an approximately lenght of 800 meters and very little depth which represent a perfect shelter against Tramuntana wind for boats.

The port isn’t very exploited and you can barely see few little wooden boats during high season. The entrance to the port used to be very protected by the Sanitja Tower, a british Tower of Defense built of stone and mortar in 1860. The inside of the tower can’t be visited because over time, it has deteriorated significantly and it’s almost demolished.

One of the main peculiarities of the Sanitja town is the several different names that appear along the history to describe it such as Seneua, Seneli, Sa Nitja, Senige, Seingelles or Senitga. As if this confusion of names wasn’t enough, its location in the maps along history has also been changing.

At this moment in time, there’s still no consensus about the location of the old town of Sansiera, so if you want to know more about it, the best thing you can do is to look at specialized archaeological sources and Wikipedia once in a while.

How To Get There

Once You Are There

If you came to Sanitja Port, that’s probably because you passed by in your way to the Cavalleria Lighthouse… And if that’s not the case, you have a mandatory visit to the lighthouse with one of the most beautiful sunsets of Menorca.

Once you have visited the port and you have seen the wooden piers and the little boats, you can also visit Cala Cavalleria or Cala Mica. And if you’re looking for a smaller beach and not that comfortable you can try with Cala Viola, between the port and the lighthouse, where they say that sometimes you can see a famous catalan actor…

And if you’re still in the mood for more activities, you can visit some of the street markets of Es Mercadal. 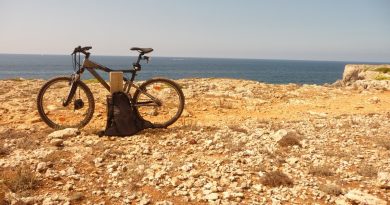 Camí de Cavalls – Everything You Should Know