If you are looking for deserted beaches in summer in Menorca you will have already noticed that it is difficult. Menorca is a very popular destination in summer and there are hundreds of thousands of tourists who visit the beaches every year.

In this article you will discover which beaches you have to go to in summer (June to August) to find the most empty beaches. As you probably already imagine, to go to the beaches with fewer people you will have to walk and enough.

How Much People are Too Much on the Beach?

You may never have wondered, but unconsciously we all have a threshold of people from which we think the beach is “overcrowded”.

So to avoid feeling “being tight” it is best to go to the beaches that in summer have more than 9 m2 of towel space per person. There goes the list!

The 5 Less Crowded Beaches during the Summer

According to the 2018 technical report, these are the beaches with the most space (square meters) for each person. Remember that the data is taken in summer, so in spring and autumn it will be even more spacious.

The 5 Most Crowded Beaches during the Summer

According to the 2018 report data, these are the 5 most crowded coves during the summer. It is no coincidence that they are from the south, since the south coast of Menorca is more accessible than the North Coast.

Where Does This Data Come From?

This data is departfrom the annual technical report published by the Consell Insular de Menorca and OBSAM.

The data of the people in each beach have been taken on each beach in 2 days of August (to know the maximum number of users). One of the days is working and the other is weekend.

There are a total of 53 beaches on the island that are counted in this report. All urban beaches are included, so it’s a good indicator of which beaches have the most people and which ones have the least.

How is the Beach Surface Measured?

If we use the ratio people /m2 to measure the crowding of the beach, it is very important to ensure that the surface of the beach is correctly counted, otherwise the reference metric has no value.

The surface of the beach is drawn from the latest official data published. For the 2018 report, the 2015 data, which is the latest published data, have been used.

To have the most reliable resting area possible (surface on which you can plant a towel), the total sand area of each beach is counted with several meters:

Map of the Less Crowded Beaches in Summer 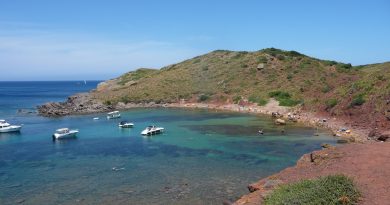 Cala Roja or Cala Rotja is the little sister of Cavalleria. It’s a small and isolated beach that even the most crowded summer days is pretty empty. It not unusal as it’s located next to Cavalleria, one of the stars of the north coast of Menorca, with plenty of sand where to place the towel and the umbrella. 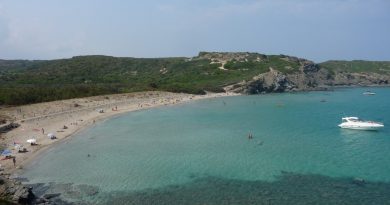 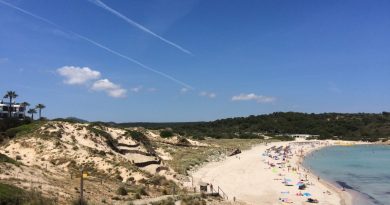