The Magic of The South

When you see a postcard of Menorca in a beautiful beach with white sand, turquoise water and a sailboat planted in the sea, you’re probably seeing a photo taken in one of the beaches in the south of Menorca.

As you may know, Menorca is divided into two quite different areas. One of the great things of Menorca is that the construction crazyness spirit that has destroyed other towns of the Mediterranean coast has been contained quite well.

As a result, in the south of Menorca, especially in the coast of Ciutadella, you can find a number of beaches with a great beauty and spectacular scenery.

There are many unspoilt beaches in the south of Menorca. The best known are Turqueta, Es Talaier, Escorxada, Binigaus, Son Saura, Macarella and Macarelleta.

If you plan to travel to Menorca in summer you will want to visit some or many of these beaches, just to feel in the middle of a postcard and take pictures as you can see on this website (you can’t do that in July and August unless you go there at 7am, it’s really crowded).

Panoramic Views of The South Beahes (From Talaia d’Artrutx Tower)

Besides visiting the beaches by car, there is a place from which you can see all the beaches of the south coast from a small tower: The Talaia d’Artrutx.

It is not easy, and I personally only go there by bike, so I don’t know if you can drive without encountering any private farm fence. To get to this tower, you should go to Son Saura by bike, or load the bikes in the car until the parking of Son Saura. Once there, you just have to find the path marked on the map below, and follow up to the private house and tower next to it. From the tower you can take pictures like the ones you see below: 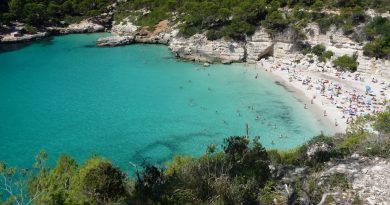 Cala Alcaufar is a very small beach in the area of Sant Lluís whose shape protects it from almost any type of swell.

The beach is 35 meters long and 45 meters wide and has plenty of space for towels. The most recognizable thing about this cove is the impressive terrace of The Hotel Xuroy, which is located practically on the sea.

This beach is usually frequented by families with children for several reasons:

Son Bou is the largest beach in Menorca and therefore one of the areas with the highest concentration of tourists and shops during the summer months. Son Bou is 8 km from the center of Alaior, and just behind the beach there is the urbanization of Son Bou, one of the largest in Menorca.

Son bou beach measures a total of 2.4km from end to end, has a very fine white sand and shallow waters that make the turquoise color of the water stand out much