How to Get to Fornells Tower

It can be reached by road in any means of transport that you can think of: Car, Motorcycle, Taxi, Bus, Bicycle.

Fornells Tower has 4 levels or floors:

The Visit to the Tower as such is not spectacular, but the views from the top of it are very beautiful. Also the price is quite reduced so it is a family friendly visit.

You Can Make a Kayaking Trip From Fornells

From Fornells you can rent kayaks and visit some of the coves of the bay.

Both children and adults can enjoy the sea from the kayak and does not require excellent physical form, so it is another plan suitable for all audiences.

Until the early 90s the Tower of Fornells was private property and the state of conservation was lousy (just like the Tower of Rambla). In 1994 the City Council of Mercadal bought the Tower from its owner and then ceded it to the Consell Insular d eMenorca for 30 years.

The restoration was completed in 2000 and since then the Tower has been used asa museum. 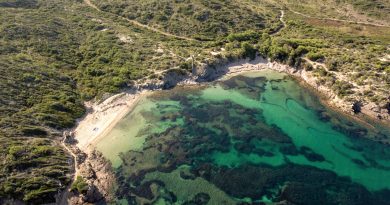 Both beaches are facing east and quite protected by the Illa d’en Colom island. Although in summer season there are usually people, it is not a very busy beach since you have to walk a good stretch to reach it.