The Winds of Menorca

Menorca is an island exposed to the winds. Both when Tramuntana blows (north wind) or when Migjorn blows (south wind), there are changes in the state of the sea and the beaches.

This is because in Menorca there are 2 quite different areas. For this reason, most people look at the wind direction before going to the beach to avoid surprises.

How to see which way the wind is blowing?

If you are not an expert and do not knowwhich wind blows on any given day,the fastest and easiest way to find out is to use the free WindGuru service.

It is a website that collects meteorological data from 6 different points of Menorca, with a fairly high reliability.

Windguru also has an app for iPhone and application for Android.

If you want something less technical and more graphic, you can use the real-time wind map of Menorca.

This map is generated by nullschool, a website that generates graphical predictions every 3 hours by using supercomputers. Highly recommended!

What beaches to go to When Wind Blows …?

As a general rule,

What to do if the wind is blowing from East or from West?

If the wind does not blow clearly from the North or South, there is no big difference between going to Northern beaches or southern beaches

Is there any problem going to the northen part with North Wind?

How do I Interpret wind data?

Calespiques a Punta Nati – Section 10 of the Camí de Cavalls

Stage 10 of the Camí de Cavalls runs from Calespiques to Punta Nati Lighthouse. It is a stage of just over 5 km of moderate difficulty and suitable for all ages as long as it is done on foot. To go by Mountain bike is more difficult, because it is a very rocky route, and with some steep slopes along the way. You will most probably have to get off the bike in several places. 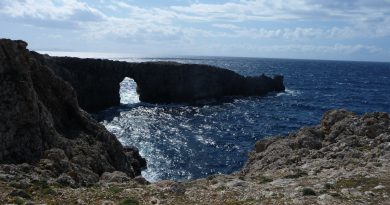 The Pont d’en Gil is a “hanging” natural bridge near Ciutadella. This bridge is simply is a “hole” in the cliffs below which small and medium boats may pass. 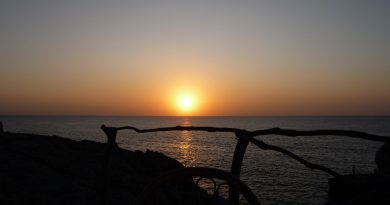 Menorca is an island in the Mediterranean Sea and therefore has a Mediterranean climate. Summers in Menorca are usually quite hot and dry, while winters are usually mild, with several days of rain.
Thanks to its climate, Menorca has a seasonal tourism is clearly concentrated in the warmer months of the year. People travel to Menorca mainly to enjoy the sun and amazing natural beaches the island offers.

One thought on “The winds of Menorca”