The kayak tour to the illa d’en Colom island is a short, simple and fun route suitable for all audiences of any age. This route is ideal from May to October and as long as it does not blow much North wind.

During the months of July and August the area between Es Grau and Illa d’en Colom has quite a lot of motor boat and sailing traffic, so it is advisable to go with a little more care to avoid any scare in the sea.

The kayak ingeby from Es Grau is incredibly simple. From the starting point on the beach of Es Grau it is possible to see the Illa d’en Colom just 1.5km away, making it almost impossible to get lost or disoriented.

Once you have reached Arenal d’en Moro you have 2 options before returning to Es Grau:

How to Get to the Departure Point (Es Grau)

To get to the beach of Es Grau you can take bus 23 from the bus station of Ma. 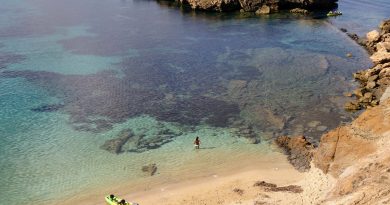 The beach of Arenal den Moro is located on the Illa den Colom, an island very close to the village of Es Grau (and the beach of Es Grau). The illa d’en Colom island has 2 beaches, and the Arenal d’en Moro is smaller but more frequented for having more sandy surface where to put the towel. 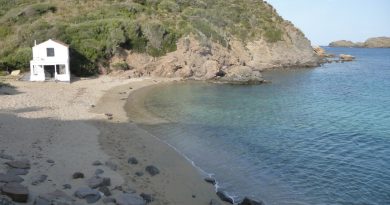 Cala en Vidrier is a small beach in the area of Es Grau. Despite being part of the north of Menorca, the beach is south-facing. Thanks to its orientation, you can enjoy many hours of sun overlooking the village of es Grau.

The beach is less than 50 meters wide and is quite protected from the north wind, so when tramuntana (north wind) winds blow it is a good option to shelter.

The itinerary 2 of the Camí de Cavalls Guide covers the stage between EsGrau and the fantastic Far de Favàritx. This tour can be done both on mountain bike and on foot. In case of doing it by bike, it must be borne in mind that it is a route with some complicated sections, some of them passing by the beach, and it is quite likely that you will have to get off the bike.